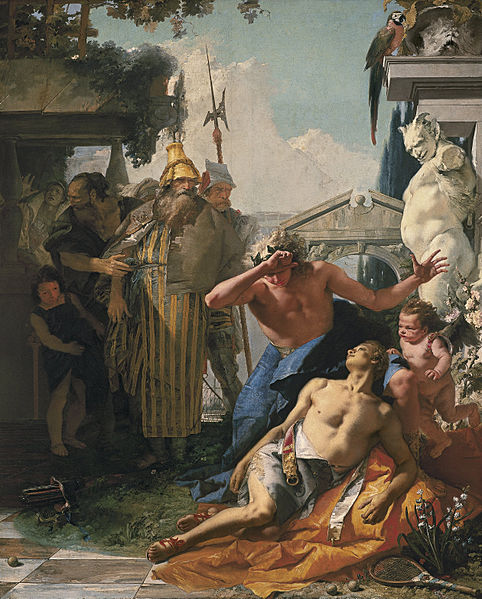 This painting, called “The Death of Hyacinth”, was completed by Giovanni Battista Tiepolo in 1753. Giovanni Battista Tiepolo, also called Giambattista Tiepolo, was an Italian painter and printmaker from Venice. He painted in the Late Baroque style, also called the Rococo style. His work was popular in Italy, Germany, and Spain. He is widely considered one of the greatest painters of the eighteenth century.
The color and composition in this painting are phenomenal. The bright colors and light surrounding Hyacinth and Apollo in the foreground create a vibrant and light-hearted tone, while the subject matter is actually very tragic. Some outstanding technical elements of this painting are the expression of Apollo and the light bouncing of Hyacinth’s skin. Apollo’s posture and expression show clear anguish and despair; overall, his posture is very theatrical. Hyacinth’s skin is painted was clearly painted with great skill and reflects light in an elegant manner.
There are many elements in this painting which differ from Ovid’s original story. The first dissimilar element is the discus that killed Hyacinth. In Ovid’s text, it is very clear that Hyacinth died when a discus hit him in the head. However, in this painting, there is no discus depicted. Instead, there is a tennis racquet in the bottom right corner with two tennis balls and another tennis ball in the bottom left corner. Additionally, there is no wound on Hyacinth’s head except for a bruise on his left cheek. The racquet, tennis balls, and bruise all suggest that Hyacinth was killed in a game of tennis and not hit by a discus. More changes in this painting that differ from Ovid’s Latin surround the flowers the Hyacinth’s blood was turned into. Since no blood is depicted, Apollo cannot transform Hyacinth’s blood into flowers. Instead, flowers are shown growing in the bottom right corner near the tennis racquet.
The final changes in the painting that differ from Ovid’s Latin come from the new figures that are included in the painting. The first new figures are the spectators on the right side of the paintings. The figure dressed in yellow and blue stripes at the front of the spectators is assumed to be Hyacinth’s father. Ovid’s original story, as well as many other depictions of the story, do not include any other people besides Hyacinth and Apollo. Another new figure that is included in this painting is the winged figure behind Hyacinth. Assuming this figure is meant to be Eros or Cupid -- the god of love, desire, and attraction -- it is another person who was not included in Ovid’s original Latin. The last new figure is the white, horned figure behind Apollo. Given the appearance of this figure, it is assumed to be Pan, the god of the wild, shepherds, and rustic music. Pan was also not included in Ovid’s original story.